Anderson Strathern Solicitors are one of Scotland’s leading law firms. They have a long-standing commitment to education and became a Partner of Impressive People soon after our launch in 2014.

Anderson Strathern are heavily involved in our State School Lawyers scheme with both its Chairman, Robert Carr, and Managing Partner, Murray McCall, featuring in the project. Robert attended Knox Academy in Haddington while Murray is a former pupil of Kilmarnock Academy.

Members of the Anderson Strathern team have also participated in highly successful Question & Answer visits to their former schools.  This programme gives young people an opportunity to discuss legal issues with a practising lawyer and at the same time shows pupils that individuals from their school go on to work in important and demanding jobs.

Anderson Strathern are also keen supporters of our IPO Awards which recognise the national and international success of former state school pupils in a wide variety of fields.

The first IPO Award was presented to the figurative sculptor Andy Scott by pupils of his former school at a ceremony in Glasgow City Chambers. We are very grateful to Anderson Strathern for their part in making this and other IPO Awards possible. 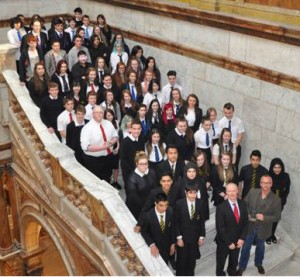