When Kirsty Headden of Shepherd and Wedderburn agreed to visit her former school, she had no idea she would become the first of our State School Lawyers to have her Q&A uploaded to YouTube.

However, Kirsty coped easily with the filming as she answered a host of questions from youngsters at North Berwick High School.

She began with a group of S6 students from the Modern Languages department who were keen to find out whether Kirsty’s decision to study Law with French at Glasgow University had been a good one. 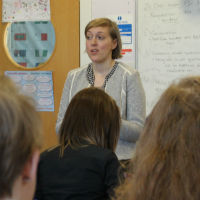 Her answer was a resounding “Yes” with Kirsty stating she enjoyed the variety offered by studying a language at the same time as Law. She also said the year spent at a French university had been a wonderful experience in so many ways.  The joint degree also did her employment prospects no harm at all.

Kirsty then met a large S3 class who asked her about her time at school and university as well as her working life as a solicitor.

She captivated the students with honest and humorous replies and provided a great insight into the challenges of holding down a demanding professional job at the same time as being the mother of a lively two-year old.

In this respect, Kirsty gave a lot of credit to her employers, Shepherd and Wedderburn, for doing a lot to help their staff reach a sensible work-life balance. 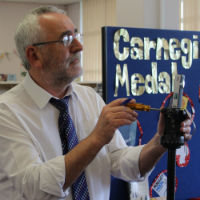 The idea to video Kirsty’s Q&A came from Mick Burns of Skills Development Scotland (SDS) who provides career advice to pupils at North Berwick High.  Mick displayed his technical prowess by shooting the video and then uploading it to YouTube.

This is the first time Impressieve People had worked with SDS and it proved a very fruitful collaboration we will be happy to repeat.

Meanwhile, the school’s Head Teacher, Mrs Rodger, and her staff of North Berwick High agreed it was wonderful to hear about the amazing things Kirsty has achieved in such a short time since leaving school.

We are very grateful to the school for opening its doors and allowing another State School Lawyer to inspire a group of talented youngsters.

We are also extremely grateful to both Shepherd and Wedderburn and the Law Society of Scotland.  Without their support, this and other State School Lawyer visits would simply not be possible.

If you wish to view Kirsty’s Question & Answer session, you can do so by clicking the image below: 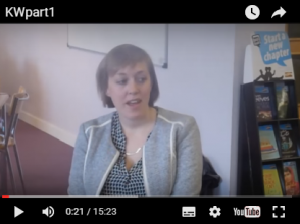 Kirsty Headden talks about school, university and her work as a solicitor … as well as the challenges of being a young mother.